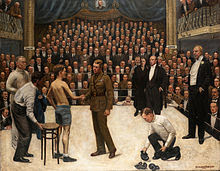 December 22, 1920: A fight between Joe Lynch and Peter Herman for the title in the welterweight 118 pounds, held at Madison Square Garden, was won by Joe Lynch.

The prize fight was the first boxing match that aired live from the edge of the ring, broadcast by WEAF NYC. In this radio boxing match, both boxers could possibly make mistakes due to the presence of microphone near the arena.

That fight was a memorable fight for Herman, because on that fight he lost his welterweight title after fighting for 20 rounds with Joe Lynch
The First Live Prize Fight Broadcast