December 3, 1928: The First Broadcast of The Voice of Firestone 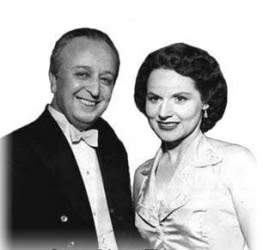 December 3, 1928: The Voice of Firestone was aired for the first time on this day.

The Voice of Firestone was broadcast every Monday at 8 PM, and in the future it became a hallmark of radio broadcasting. The program continued to run at the same time until 1931, when it changed to 8:30 PM. The show had a loyal sponsor for its entire broadcast.

The Voice of Firestone was a classical music program that aired on both radio and television . On the show, the leading singers sand selections of opera and operetta. During the early days of of its broadcast on NBC, the program was titled  The Firestone Hour. The program continued to run until 1963.

The series starred Rise Stevens, Robert Merrill, Eleanor Steber, Igor Gorin, Nadine Conner, Dorothy Warenskjold, and Thomas L. Thomas. The Voice of Firestone was the first commercial radio program to be carried simultaneously on both AM and FM radio stations. Firestone's 25th anniversary program was broadcast November 30, 1953, and it was heard on radio until 1956.
The First Broadcast of The Voice of Firestone